England’s former World No.1 Laura Massaro got her 2019 Manchester Open campaign off to a winning start after she overcame compatriot Millie Tomlinson in round two at the National Squash Centre.

The 2013 World Champion announced earlier this week that she will retire at the end of the season and she ensured that she put on a strong showing in front of her home crowd as she powered past World No.22 Tomlinson by an 11-8, 11-4, 11-8 margin at the PSA World Tour Silver event. 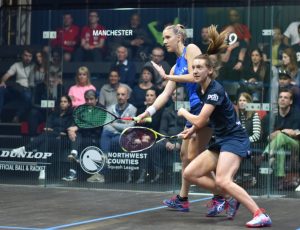 “I had to adapt as I was on there,” said Massaro following her win. “I went with it, sticking with the bits that were working, and trying to work out the bits that weren’t. I felt pretty focussed on there more than anything, despite it being such a tough week.

She will now face top seed and Egypt’s World No.3 Nour El Tayeb in tomorrow’s quarter finals after she conquered France’s World No.35 Coline Aumard in straight-games to advance. 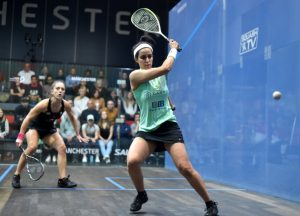 PSA World Championship runner-up El Tayeb was forced to utilise her experience as she battled back from going behind in the third to send out the Frenchwoman by an 11-9, 11-5, 11-8 scoreline.

“I thought we were going to a fourth,” said the 25-year-old Egyptian. “She has improved so much from the last time we played and I could see that because I’ve been following her results recently. She can attack anything that was short and would attack it very well. It was a very hard game and I’m pleased with how I played. 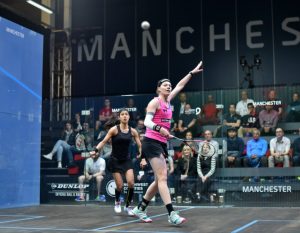 They will be joined in the quarter finals by English No.1 Sarah-Jane Perry after she toppled eight-time World Champion Nicol David, who like Massaro will also retire at the end of the season, in four-games.

The tall Englishwoman started strongly, before losing her concentration in the third as David mounted a comeback. The Malaysian continued that momentum into the fourth, but Perry was able to reign her back in to close out in four games.

“When I saw the draw, Nicol had announced she was going to retire and there was that bit of dread in your mind that will the occasion get into my head a bit,” said 28-year-old Perry. “But on the other side I was actually really happy because she is such a fantastic player and I wanted that thrill of competing against Nicol one last time. 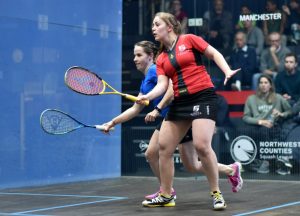 Perry will take on Wales’ World No.9 Tesni Evans in the next round after she put in an immaculate display against Dutch No.1 Milou van der Heijden to advance in Manchester.

The Welshwoman, who won her first British Nationals title at the National Squash Centre, proved that she was a contender for the PSA World Tour Silver title after she sent van der Heijden out by an 11-7, 11-9, 11-3 margin.

“Any time I play Milou and come out with a 3-0 win then I’m really happy,” said 26-year-old Evans. “She is playing some really good squash at the moment and it definitely won’t be long until she is moving up more than she already is. 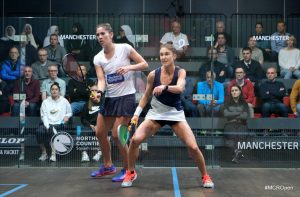 Elsewhere, number two seed Joelle King ensured a safe passage through to the last eight as she overcame a resilient Nele Gilis of Belgium.

The World No.5 started strongly to take the first two games, before Gilis made life difficult for the New Zealander by taking the third. In the end, King’s experience proved to be too much for the Belgian to handle, as her class shone through to take an 11-5, 12-10, 8-11, 11-1 victory.

“I felt like in the first I had my game plan pretty spot on,” said 30-year-old King. “She has had some good results of late and has been pushing the top players so her resilience doesn’t go away. She has improved as a squash player a lot and I know it was going to be tough today and it was. 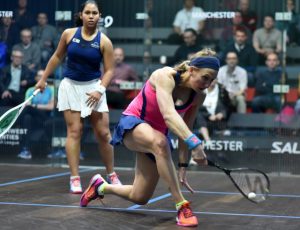 Next up for King is England’s former World No.3 Alison Waters after she fought off a comeback from Egypt’s World No.14 Salma Hany.

Waters claimed the brighter start as she opened up a two-game lead, before Hany boldly battled back to claim the next two and push the match to a tense fifth.

It looked as though the tie was going to go in the way of the Egyptian as she raced into a 9-5 lead, however, Waters soon fought back and eventually was able to see out the victory and book herself a place in the last eight.

“I just thought if I’m going to lose this then I need to go out trying something,” said the Englishwoman. “My shots came off and I just tried to be relaxed and I think that was my whole thing for the game.

“Sometimes you just need to not put so much pressure on yourself and let it flow and I did that and luckily I came out the winner.

“We were here each year for the Nationals and so I have some good memories. It feels a bit like a second home and I’m pleased to be back here in Manchester.” 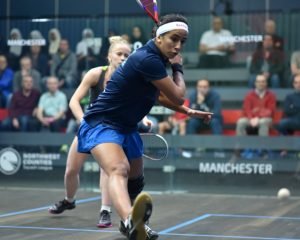 The other quarter final tie will see Egypt’s World No.7 Nouran Gohar face United States No.1 Amanda Sobhy after they secured respective wins over England’s Emily Whitlock and Julianne Courtice.

Gohar was forced to fightback from one-game down against Whitlock as the Englishwoman started strongly to nullify the attacking intent of the hard-hitting Egyptian. However, the World No.7 was able to maintain her composure to come back and secure a quarter final berth.

“Her length was immaculate today,” said 21-year-old Gohar. “Usually I’m the one who plays it in the backside and hit the ball in the right positions, but she did that today and I had to try and find another solution.

“The last two months have been good and I’m trying to play well on court and the results will come for sure.” 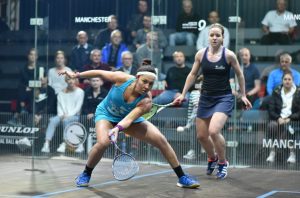 Meanwhile, Sobhy took out home favourite and Manchester-based Courtice in a tough battle to move into the next round.

“Last time we played it was on home soil for me, we played in Chicago,” said the 25-year-old from Boston. “I had the home crowd which helps a lot and the home court advantage, it was the reverse this time and she has been playing really well. She has improved a ton since we last played in February, so hats off to her for really making me push this round and I’m really happy to be through.

“I played Nouran a couple of years ago when I came back on tour after being injured. She had a really good week in El Gouna and I had a pretty decent week as well. I’m looking forward to tomorrow and it should be good.”

The quarter finals take place on Saturday May 11 at 17:00 local time (UTC+1) and the action will be broadcast live on SQUASHTV (rest of world), Eurosport Player (Europe only) and the official Facebook page of the PSA World Tour (excluding Europe and Japan).