The Manchester Open comes to a conclusion this evening, with the finals taking place at the National Squash Centre from 18:00 (GMT+1).

First off, the top two seeds in the women’s draw, in Egypt’s Hania El Hammamy and England’s Sarah-Jane Perry, will do battle. Following them on to court will be the ‘Peruvian Puma’, Diego Elias, as he faces Welshman Joel Makin for the men’s crown.

You can catch all the action live from the National Squash Centre in Manchester on SquashTV, and the official Facebook page of the PSA World Tour (Indian sub-continent only).

Here’s the Order of Play 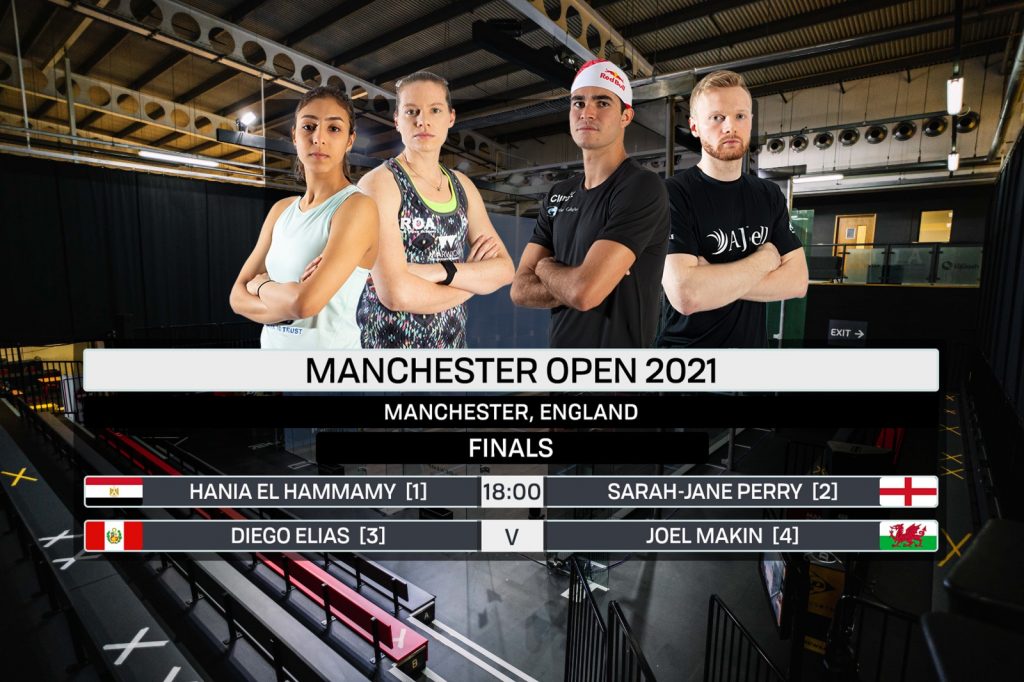 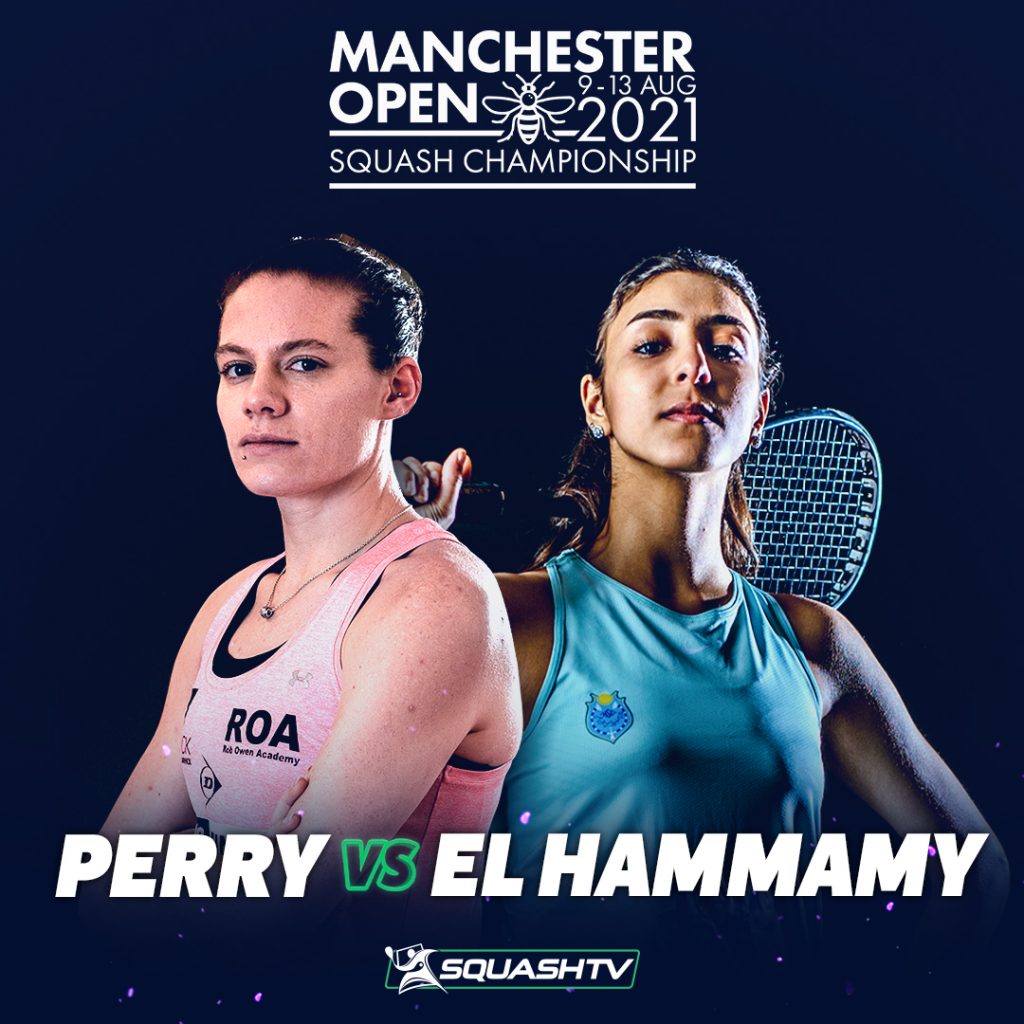 The first match of the evening sees Egypt’s World No.7 Hania El Hammamy take on England’s World No.6 Sarah-Jane Perry for the women’s title.

The pair have met on four previous occasions on the PSA World Tour, with both players having tasted success twice. El Hammamy won their last clash, at the CIB PSA World Tour Finals in June, while Perry won their only battle in a final, which came in December 2020, at the CIB Black Ball Squash Open. 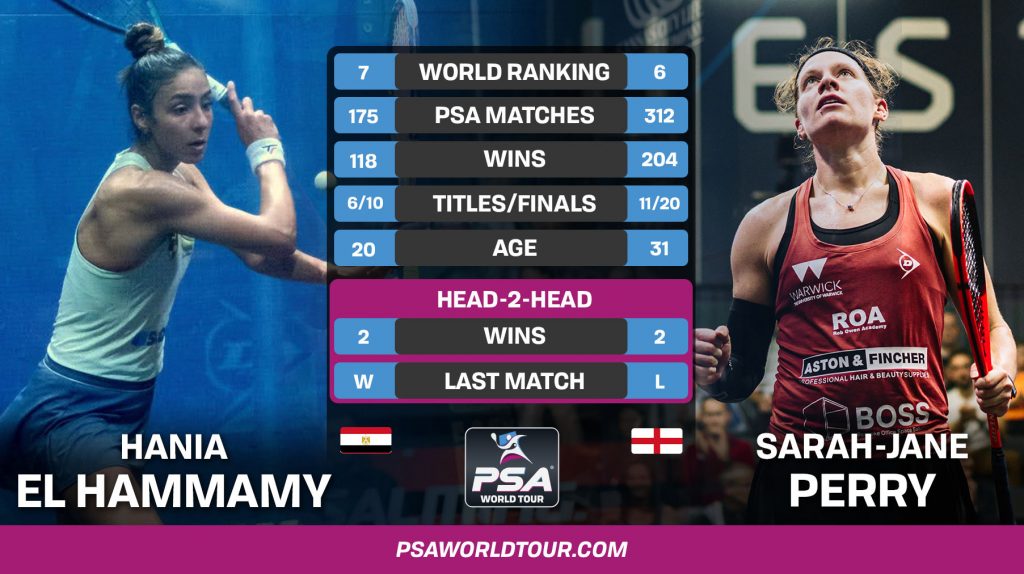 The young Egyptian has flown through the tournament to reach the final, spending an average of only 30 minutes on court per match, and winning all three of her contests without dropping a game. She has defeated Malaysia’s Rachel Arnold, Belgian Tinne Gilis and Welshwoman Emily Whitlock, all 3-0.

Sarah-Jane Perry has only dropped the one game en route to the final, on the same court as she won the British National Championships last Friday evening. The Englishwoman has defeated compatriot Jasmine Hutton, Malaysian Sivasangari Subramaniam and Welsh No.1 Tesni Evans to make the final of the Manchester Open. 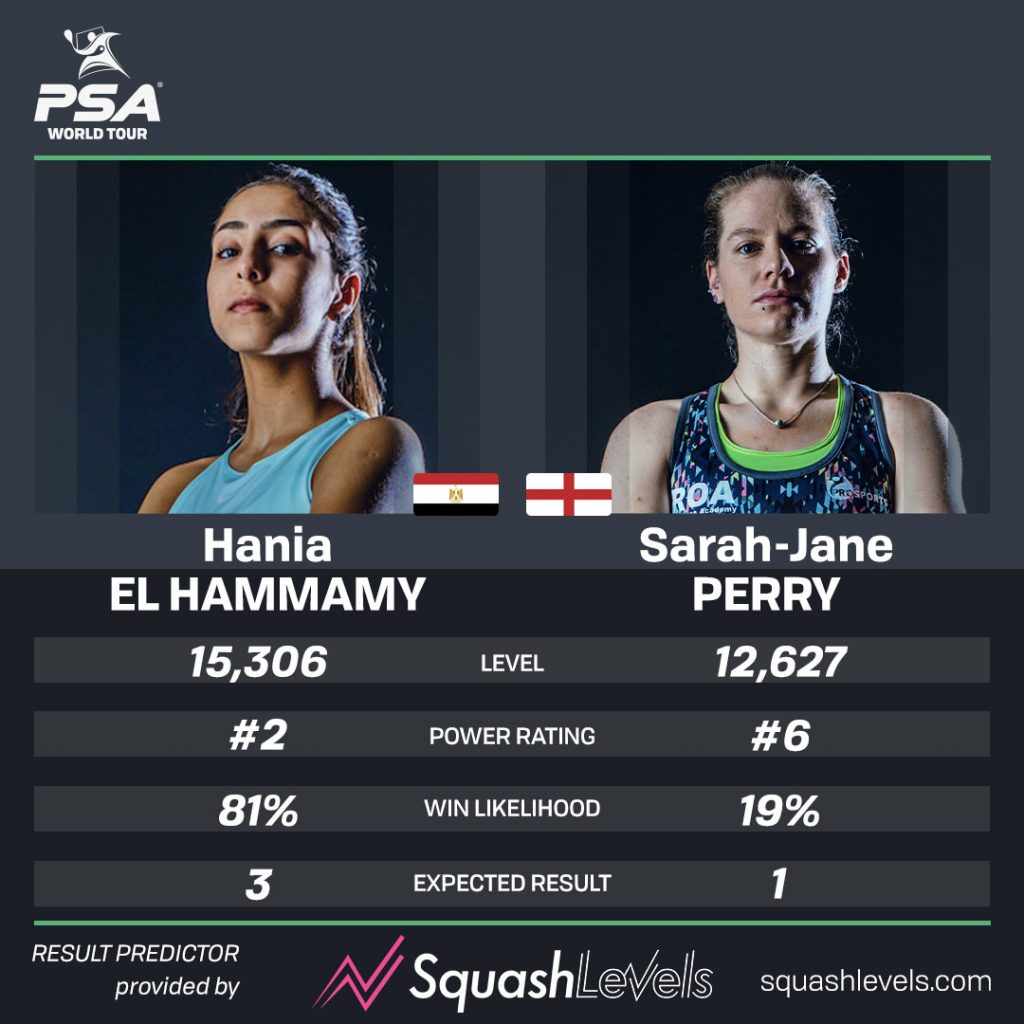 Due to her imperious form, El Hammamy has risen to #2 on the SquashLevels Power Ratings, and she is expected to win tonight, with an 81% win likelihood over the #6 rate Perry, according to their algorithms.

Can Perry secure a second title in as many weeks on this court to follow her Nationals success? Or can El Hammamy get revenge for her Black Ball final defeat? 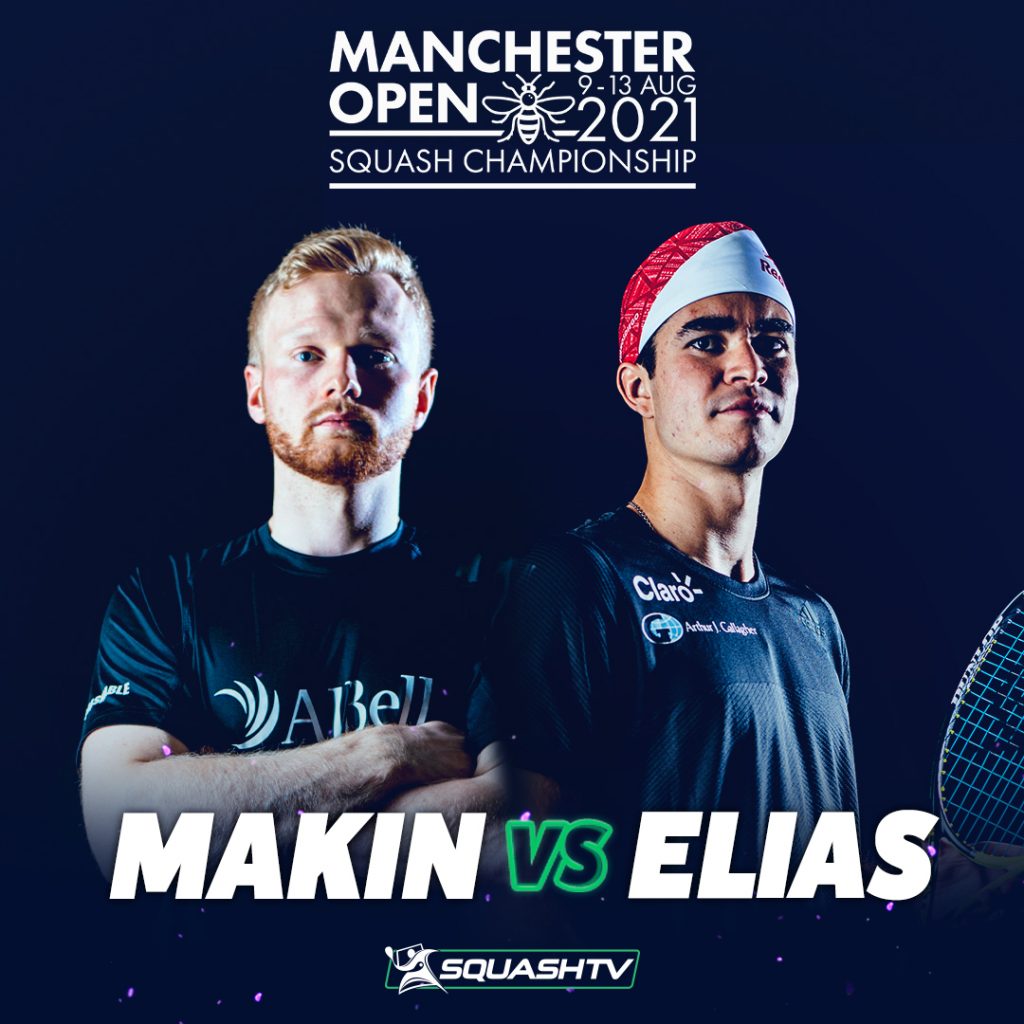 The men’s final sees Welshman Joel Makin take on Peru’s Diego Elias for the title, with Makin in the same situation as Perry, aiming for a second title in as many weeks.

The pair have met five times previously on the PSA World Tour with the ‘Peruvian Puma’ having won four of those, including their most recent meeting, which came in he third round of the Windy City Open presented by the Walter Family in 2020. Makin only has one victory over Elias, with that being a five-game win in the second round of the J.P. Morgan Tournament of Champions a month earlier. 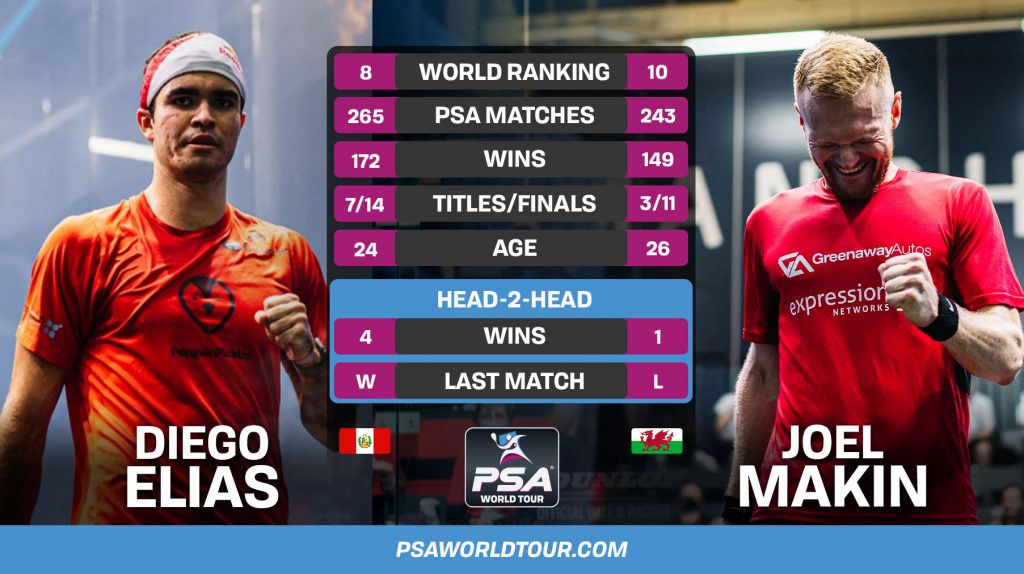 Elias has dropped just a single game throughout the tournament so far, with that coming in his second round contest over Englishman Patrick Rooney, which he won 3-1. He then defeated Egypt’s Omar Mosaad in straight games, before overcoming the tournament’s top seed, Marwan ElShorbagy, also with a 3-0 scoreline.

Makin, on the other hand, has played 14 games across his three matches, with two of those going the distance and longer than 80 minutes. He started with a 3-1 victory over Englishman Adrian Waller, before needing all five games against both Mazen Hesham and Youssef Ibrahim, winning both 12-10 in the deciding game. He has been on court for 89 minutes more than his opponent tonight. 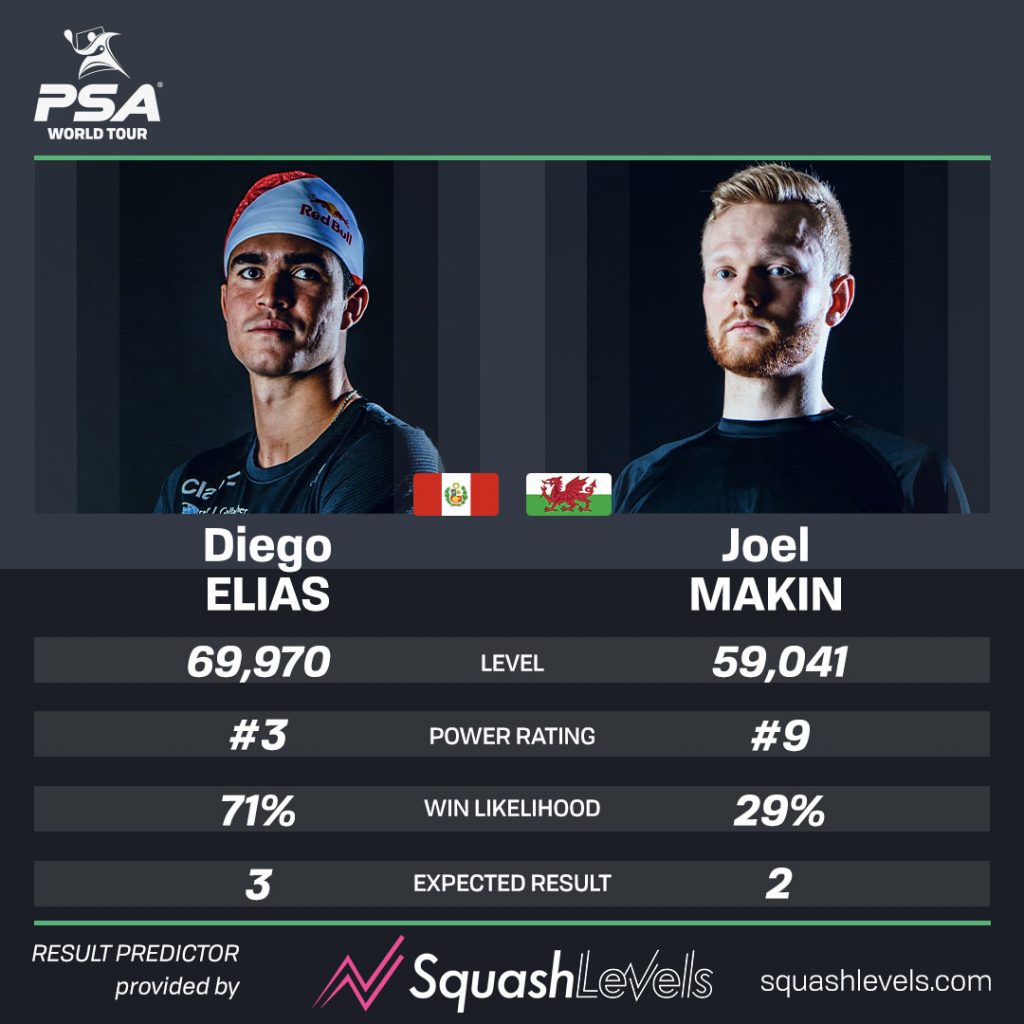 Makin only sits at #9 on the SquashLevels Power Ratings, while Elias is the #3. According to their algorithms, the Peruvian has a 71% chance of victory tonight.

Can Elias secure the win, and take a first title since the Motor City Open in 2020? Or can Makin find more in the tank to go again, and win a second title in Manchester in seven days after his Nationals victory last week?