At just 21-years-old Nouran Gohar already has a list of impressive achievements to her name including winning her first PSA Platinum title at the age of 18 in 2016, when she claimed the Hong Kong Open title. 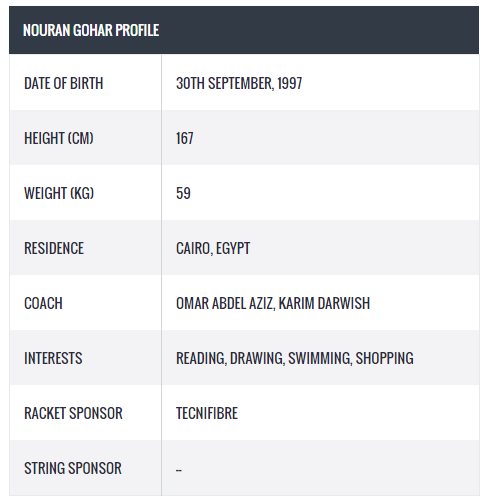 The young Egyptian has enjoyed a resurgence of form this season, after a couple of lacklustre years by her high standards following that Hong Kong Open win.

This season Gohar has pushed on and has become one of the main contenders on the women’s tour. The Egyptian recently reached the final of the El Gouna International – her first final appearance at a Platinum tournament since the 2016 Hong Kong Open.

She also reached the semi-finals of both the Black Ball Squash Open and 2018 Hong Kong Open, losing out to World No.1 Raneem El Welily in both.

Gohar will face either New Zealand’s Amanda Landers-Murphy or England’s Emily Whitlock in the last 16.