Down to the last eight players in the Manchester ‘bubble’, and there’s Egyptian interest in all four of tonight’s matches.  You can Watch Live on SquashTV/Eurosport and TV channels such as BT Sport, and we’ll have updates and roundups here …

Top seeds through in five as Tayeb and Gawad reach finals 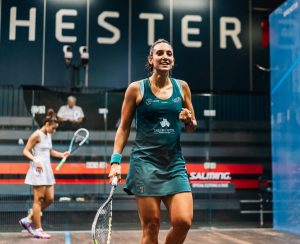 The first match was a real cracker as top seed Camille Serme failed to capitalise on a match ball in the third as Hania El Hammamy stormed back into contention. Both had leads in the decider, but it was the Frenchwoman who finished stronger to become the first finalist.

“I just wanted to make her life tough. I didn’t want to give it to her too easily,” said Camille. 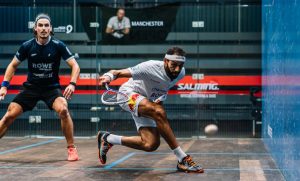 Mohamed ElShorbagy had lost to Paul Coll for the first time in their last match, and although the World #1 took the lead impressively, Coll fought back, forcing a decider in which the Egyptian surged ahead, taking the match on his third match ball.

“I had to use my experience and I had to be strong mentally,” said Mohamed, “I think I was a bit better than him in those respects at the end of the match.” 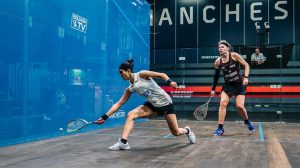 Nour El Tayeb had never lost to Sarah-Jane Perry, and was dominant in the early stage of their match. Perry fought back, but Tayeb edged a close third and pulled clear in the fourth to claim her place in the final.

“I wasn’t proud of my squash in that match but was pleased with how I dug in,” said Nour. “SJ is always a tough opponent so I’m just happy to get through.” 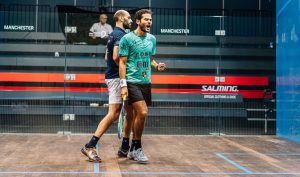 Karim Abdel Gawd dispensed with tradition as he took the first game against Marwan ElShorbagy, who fought back after Gawad had taken a two game lead, but couldn’t complete the comeback as Gawad claimed the fourth on extra points.

“Playing Marwan is always tricky, you never know what’s going on in his head,” said Karim.