The Manchester Open returns to the PSA World Tour this week. It will be the fourth time the event is being held, with action taking place at the National Squash Centre.

To get you ready for all the mouth-watering action that will be unfolding in Manchester this week, take a look back at some of the best matches from the event’s history with plenty of World No.1s and World Champions on show.

In the first PSA World Tour event back after a tour suspension due to COVID 19, World No.1 Mohamed ElShorbagy was looking to get straight back to winning ways in Manchester. But could he get past the World No.5 Paul Coll to take his place in the final?

In an all British battle, England No.1 Sarah-Jane Perry faced Welsh No.1 Tesni Evans for a place in the final four at the inaugural Manchester Open.

With two contrasting styles coming head to head, who would be able to hold their nerve the best and move through to the semi-finals?

In last year’s event, a highly anticipated clash between one of the tour’s most gifted players and one of the most athletic players took place in the quarter finals.

Wales’ Joel Makin and Egypt’s Mazen Hesham played out an 82 minute 3-2 on the glass court in Manchester, but who would be the one advancing in this battle of skill versus physicality?

No.1 seed Camille Serme faced a tough task in her semi-final in 2020, as she took on Egypt’s rising star Hania El Hammamy.

The relentless hitting from El Hammamy was sure to set up a difficult but entertaining match for the Manchester crowd, and it didn’t disappoint. But who would it be taking their place in the final?

Young Egyptian Youssef Ibrahim had scored some impressive wins throughout the 2021 event, including a win over former World Champion Karim Abdel Gawad in round two.

He now faced a completetly different task, however, as he had set up a semi-final match with ‘The Golden Tiger’ Joel Makin. Could the Egyptian continue his impressive run?

Known for her fighting spirit, Evans would need to fight in every second of this match to progress. Could she do it?

Two former World Champions battled it out for the title in 2020, as Mohamed ElShorbagy and Karim Abdel Gawad met once again on the PSA World Tour.

Would the mix of skill and pace from ElShorbagy prove to be too much for ‘The Baby-Faced Assasin’? Or could the outrageous shot-making and finesse of Gawad score him another win over the beast? 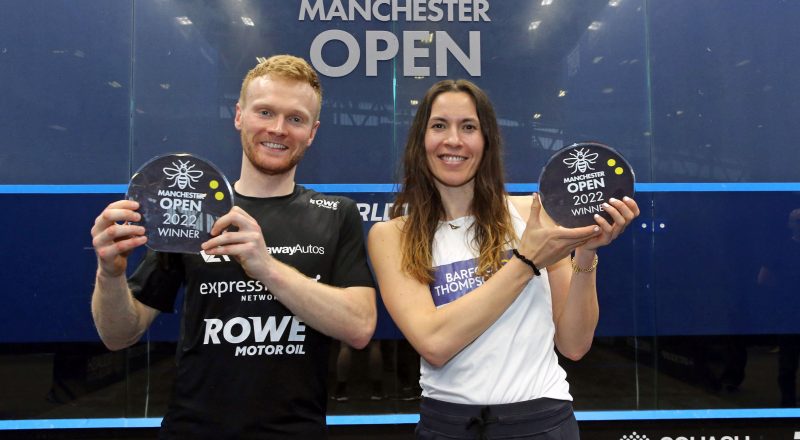