Quarter-Finals at the NSC 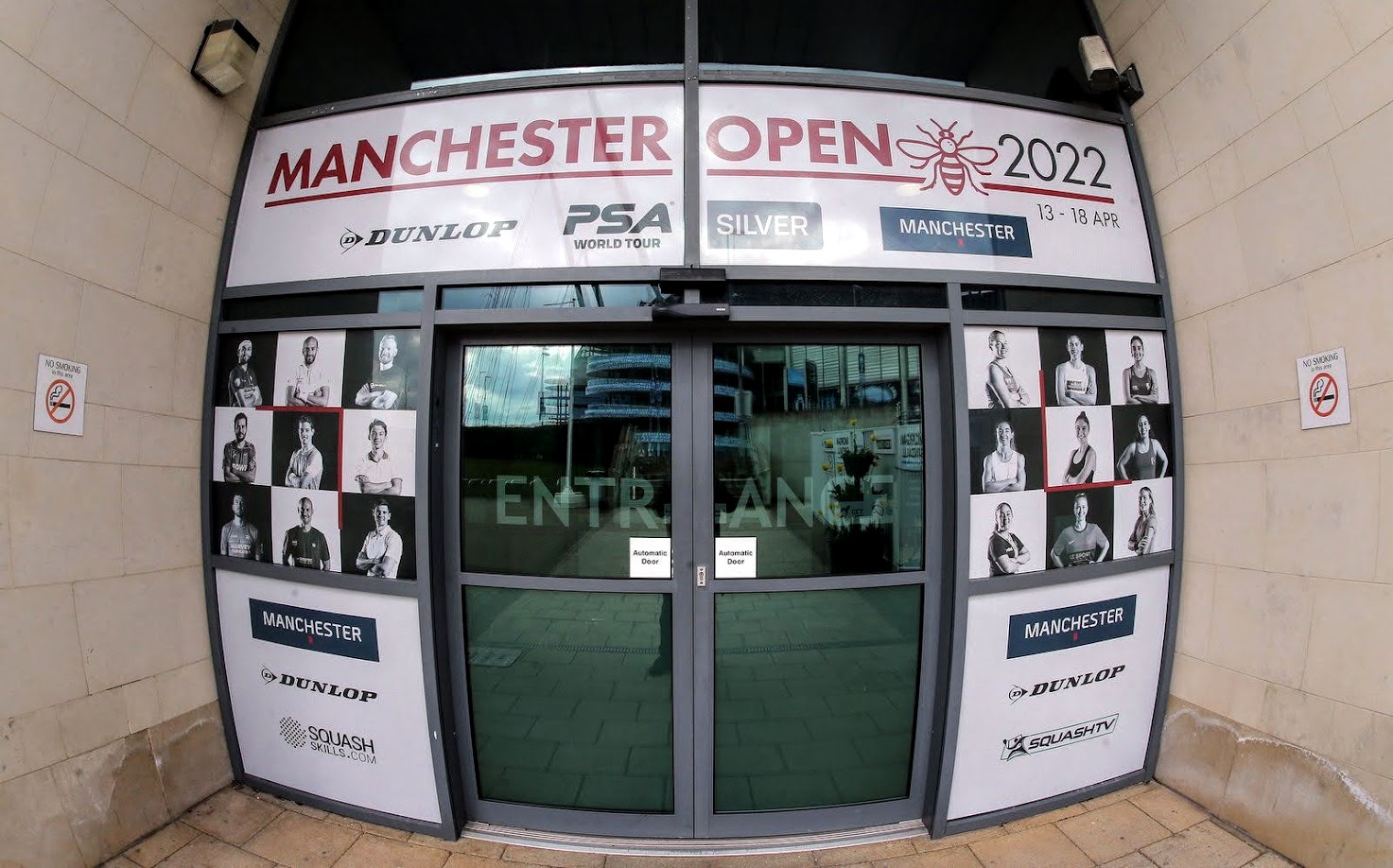 The Manchester Open’s fourth edition continues with four Quarter-Final matches from the bottom half of the PSA Silver draws, on the Glass Court at the National Squash Centre.

There’s home interest in all four of today’s matches, starting with England’s Gina Kennedy against 2019 finalist, Wales’ Tesni Evans. Patrick Rooney then aims to consolidate on his sensational Round Two upset as he meets Germany’ Raphael Kandra. 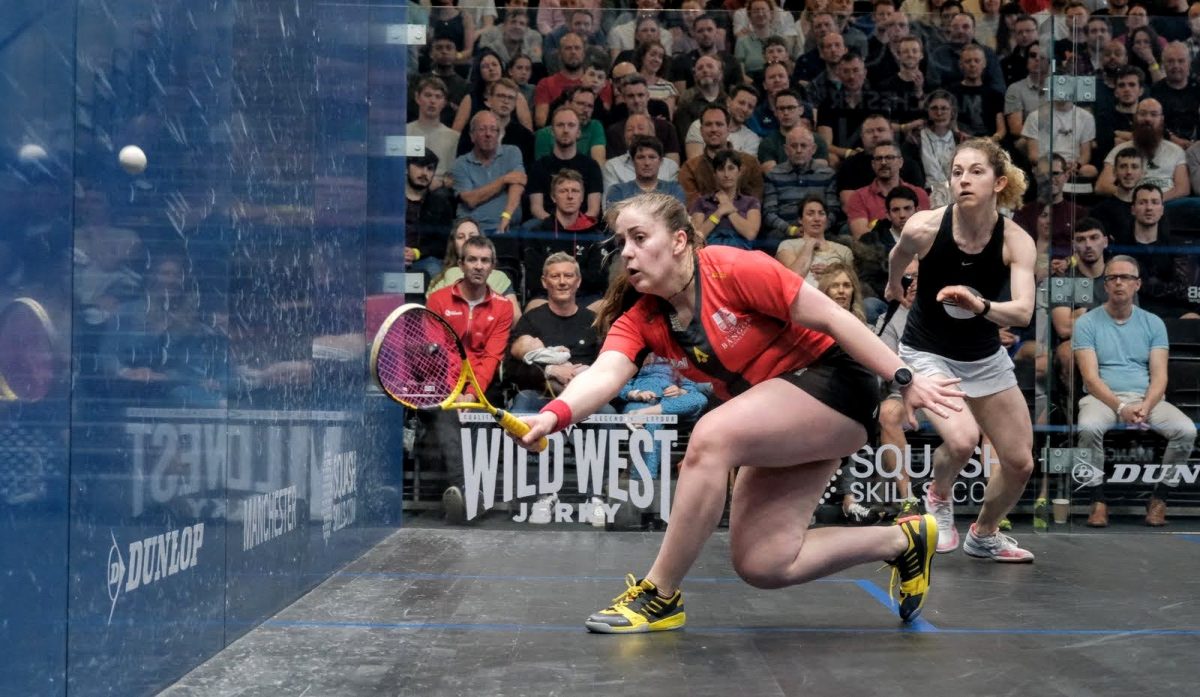 Opening the day’s play for the bottom half quarter finals was an all-British encounter between England’s Georgina Kennedy and Wales’ Tesni Evans. 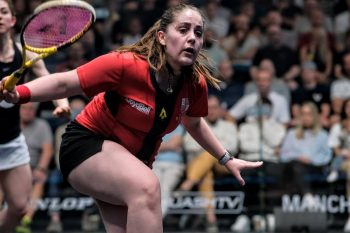 Evans was a runner up in this event in 2019 as she lost out to Joelle King in the final. The Welshwoman comfortably defeated France’s Marie Stephan to reach today’s quarter final, whilst, Kennedy overcame Hong Kong’s Tze Lok Ho.

Evans capitalised on a slow start from Kennedy and ran out to a 6-1 lead. Kennedy started to work her way back into the match, however, and got herself back to within one point at 8-7. From here, Evans managed to produce a quality finish to the game to take it 11-8.

Evans picked up in the second exactly where she left off. She fired the ball in short with supreme accuracy and forced Kennedy into several uncomfortable movements. After taking the second game 11-6, Evans’ form continued. Kennedy didn’t look at her best but this was exploited to the maximum by a fired-up Evans. 11-4 was the score in the third game, which sees Evans reach yet another Manchester

“Pretty happy about that!” Said Evans. 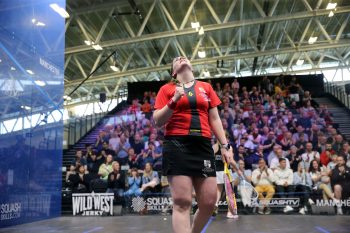 “I couldn’t really play much better than that, Gina seemed a little bit off today as well. We had a pretty tough schedule last week in Glasgow for the Doubles, I was fortunate enough not to play both events and I also had a partner in Joel Makin who covered ¾ of the court. I can’t play much more accurate than that and I knew that I had to do that at my best. Really happy that I could put out a good performance.

“We put loads of hours in and that’s the way I like to play squash, it’s trying to minimalize as much work as possible, some days it comes off like today, other days it really doesn’t. You play for that one match where you hit everything.

“I love this place so much, I love playing here. I’m so happy the glass court has been put back here and I’ve got some good friends in the crowd, a lot of Welsh people, all my family in the front row who mean the world to me and have got me through some rough times. This one is for them.” 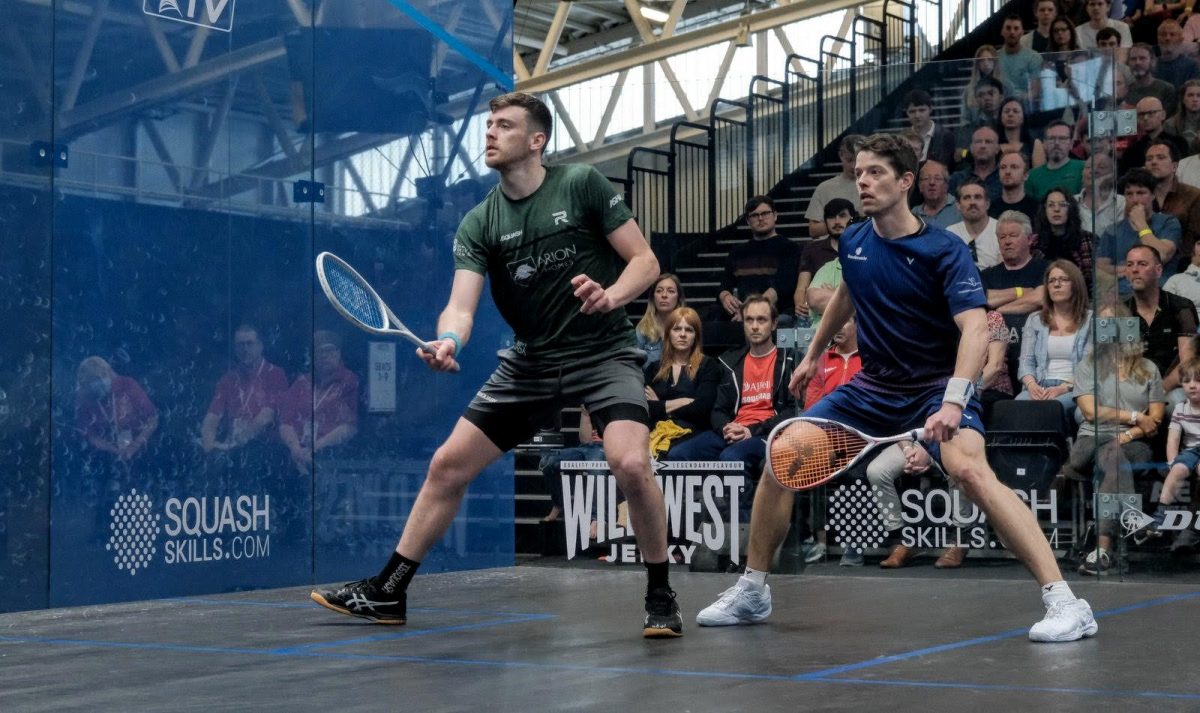 Crowd favourite and local player Patrick Rooney was next onto court as he faced Germany’s No.8 seed Raphael Kandra for a place in the last four.

Rooney impressively defeated No.2 seed Marwan ElShorbagy in his round two match, whilst Kandra go the better of fellow-European Lucas Serme in straight games to advance. 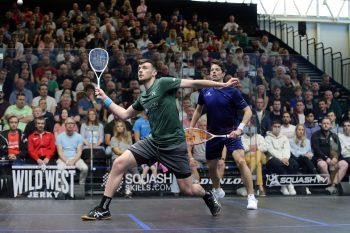 Rooney possesses incredible touch at the front of the court, which was on display right from the outset as the Englishman set about working the German into all areas of the court. Kandra’s athleticism was being tested to the maximum as the Englishman’s volleying was relentless. Rooney secured a 2-0 lead winning 11-8, 11-4.

Kandra found a way back into the match by narrowing the angles for Rooney, keeping the ball straight and tight. The World No.26’s concentration dipped slightly allowing Kandra to capitalise on some loose attacks and secure the third game 11-8.

Rooney fired straight back in the next game, getting back on the volley and twisting and turning his German opponent, making life extremely difficult for Kandra. Rooney’s touch at the front of the court was a continual problem that the higher seed was faced with and proved too much to handle in the end. Rooney closed out the game 11-4 to win in 46 minutes.

“Feeling tired but good, it was pretty all over the place,” said Rooney afterwards. 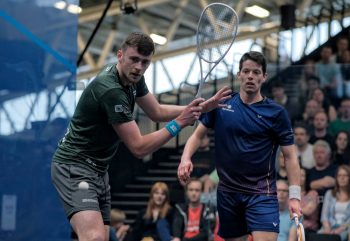 “There wasn’t much consistency to that match, but I enjoyed it, it felt like one of those practice matches where concentration goes out of the window and you play whichever shot you want, but I like it.

“You don’t want to get too ahead of yourself, but I had a lot of confidence coming from the previous round, I had to keep my feet on the ground to get past Kandra.

“I like playing in front of a crowd, it makes it more enjoyable. If they’re enjoying it, then I’m enjoying it. I’ve played too many matches with no crowd, so this feels good.  I’m playing World Champs in a few weeks so you can fly over if you want!

“I watched Joel and Youssef play in Washington not too long ago and it was brutal, whoever wins that I’m in for a tough match. Let’s just hope they tire each other out, but it’s Joel Makin we’re talking about. Just give me any of them, I don’t care.” 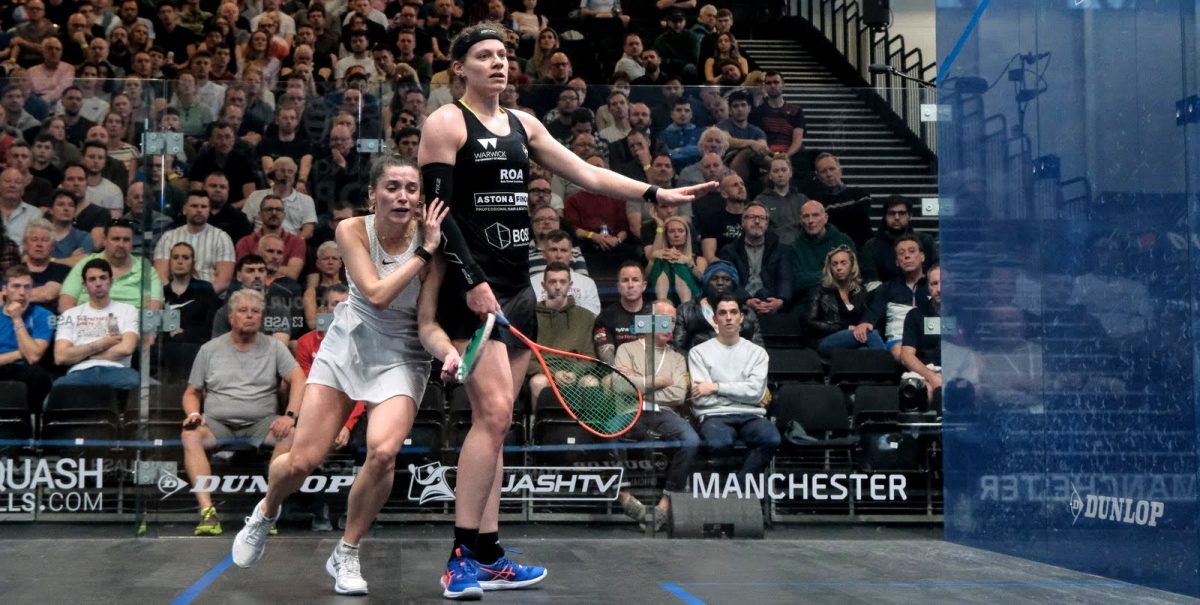 No.1 seed Sarah-Jane Perry was victorious in an all-English battle with surprise semi-finalist Jasmine Hutton at the National Squash Centre. 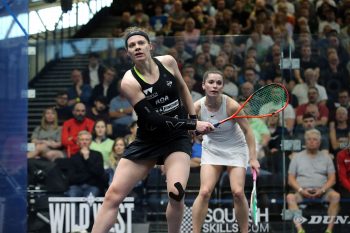 Hutton’s energetic style of play was sure to be a test for the England No.1, but it was Perry who started the better of the two, using her trademark hold to twist and turn her younger opponent. Hutton did well to fight back to 8-9 but couldn’t stop Perry from converting the first game.

Perry’s rhythm looked unbreakable in game two and Hutton had no answers for the pinpoint accuracy of the World No.6. Perry quickly doubled her lead 11-5. Despite Hutton securing the third game, by taking Perry on at the front of the court and counter attackig superbly, it was not enough to stop the 2021 runner up from taking the match.

“I’m just thinking about trying to win the next rally, I had a few periods where my concentration dipped and Jazz took full advantage of that,” said Perry in her post-match interview. 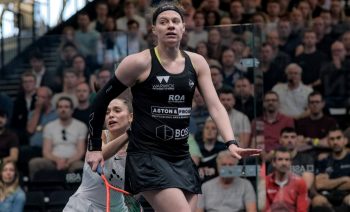 “It’s a testament to how much she has come on particularly in the last 12 months. We have the same coach and we train together quite a bit. Those are the types of matches where 12 months ago that if I lost my concentration, she would let me get away with it a bit more, but today she didn’t. She’s had some fantastic results, she’s really dangerous and is looking to push on and is nearly inside that top 20 now – I don’t think it will be long, I know how hard she works.

“Me and Tesni were joking last night and have worked out that we have played at every Manchester Open. We both had to put extra in today to win and make sure that happened tomorrow. We are sharing a room, so I have to check everything when I get back – no alarms set for 4am and things like that. We are always playing jokes on each other and doing silly little things anyway, so I’m sure she’s finding some horrible pictures of me from the match and sending them in the group chat.

“We practiced together this morning and yesterday, we have been on court a few times and I know how well she is hitting the ball. Even if she has not been on form, she can bring it any day and we have had some battles over the years and the crowd will be hoping for one of those tomorrow.” 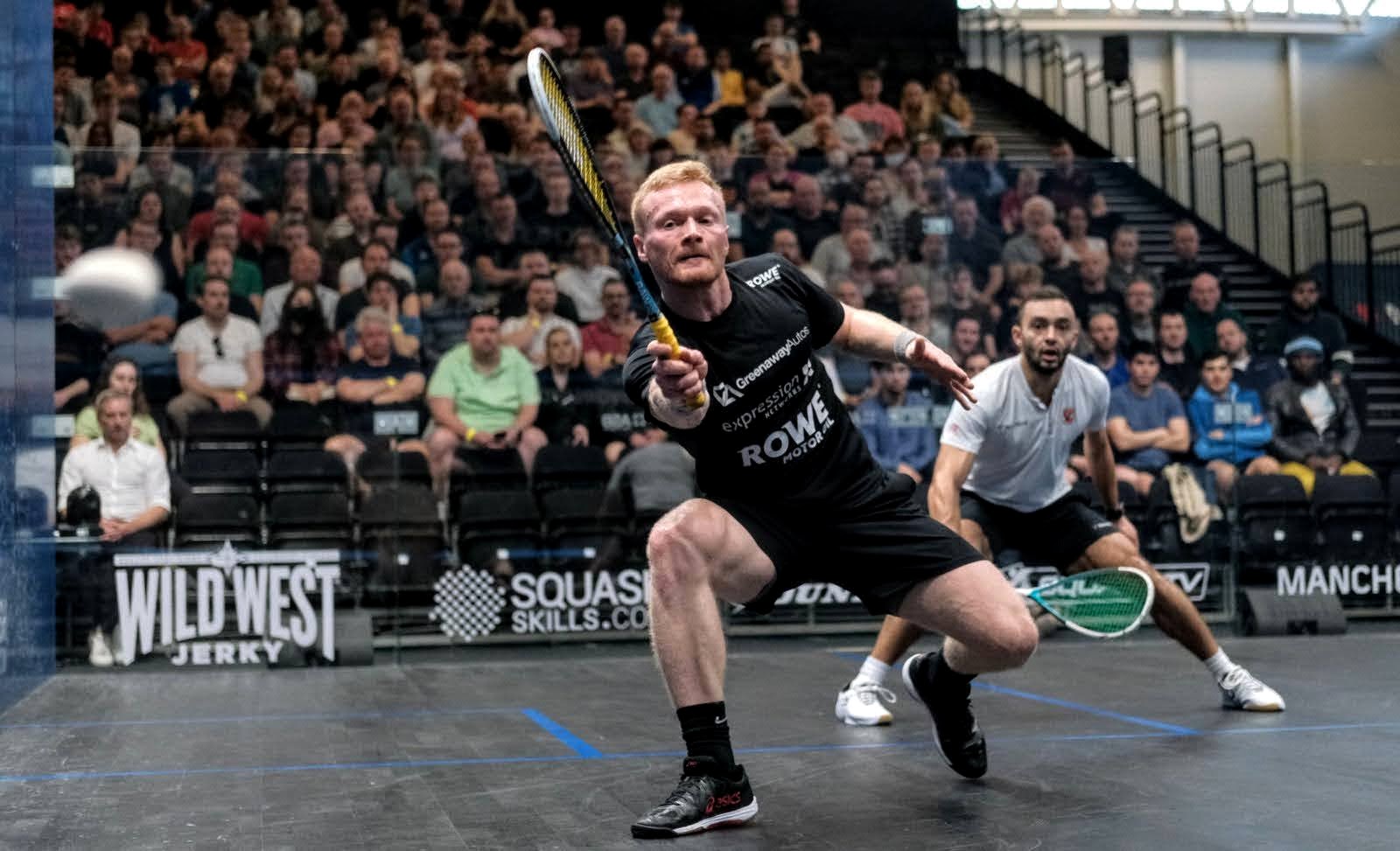 Wales’ World No.9 Joel Makin powered his way into the semi-finals of the Manchester Open after a dominant straight-games victory over Egypt’s World No.15 Youssef Soliman. 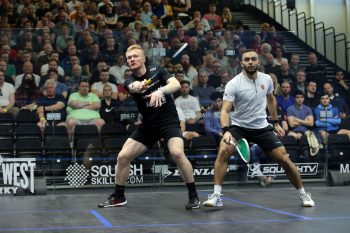 Makin went into the match with an impressive 5-0 record in their head-to-head standings, with their last match proving to be an 80-minute battle at the Squash on Fire Open earlier this year in Washington D.C.

It was more straightforward for the Welshman this time around though as he extended the rallies in the first game to put work into the legs of the Egyptian as he came from 6-3 down to convert the opener 11-9.

That first game proved to be crucial as Makin laid the foundations for a confident display with Soliman struggling to break up the rhythm of the 27-year-old who comfortably saw out the next two games to win 11-9, 11-4, 11-4  in 50 minutes. 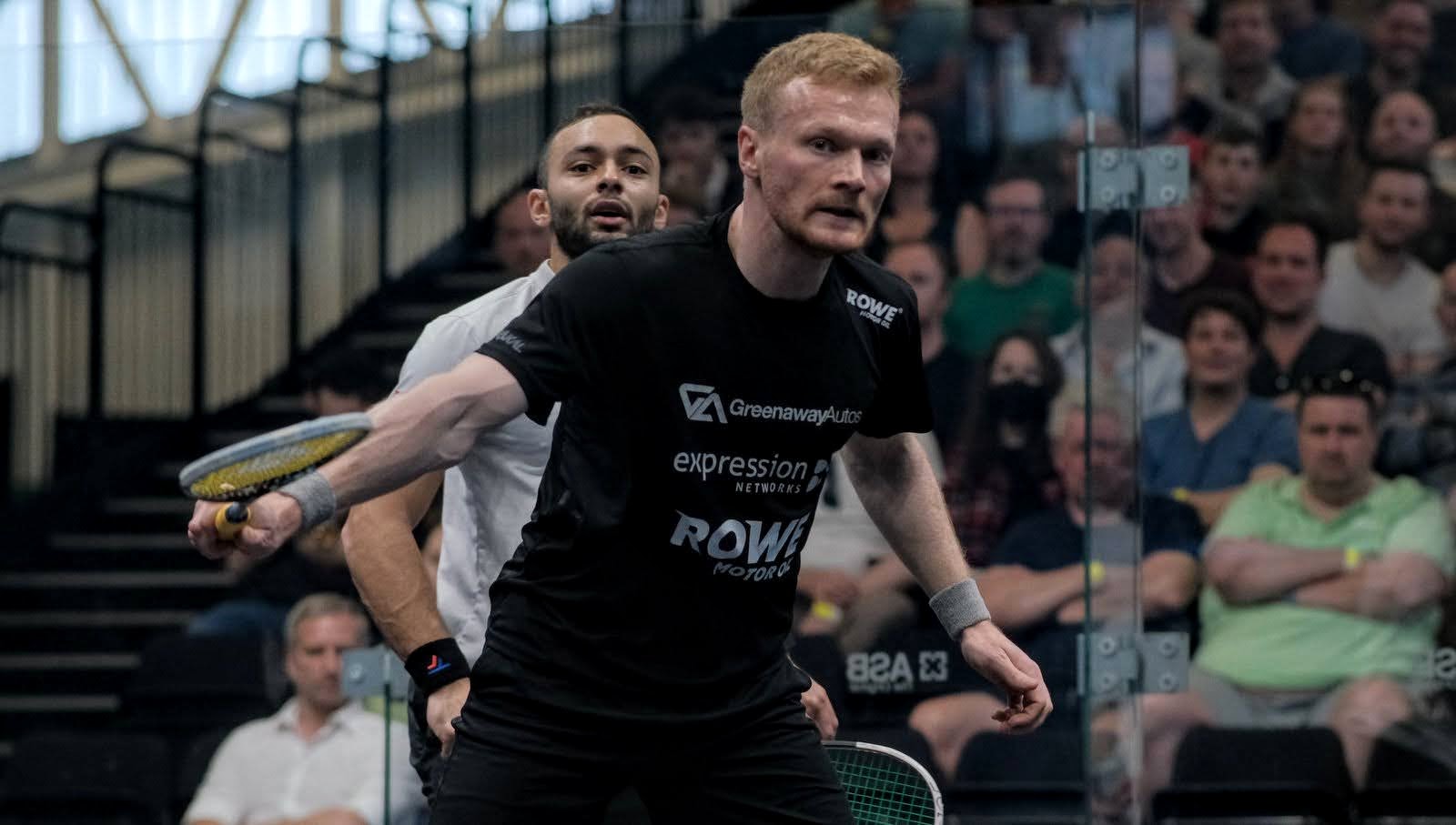 “He’s hard to play, he’s got that quick movement and even when he looked like he was slightly injured, he slid into the splits, rolled a counter drop over and it was hard to know as he was a bit in and out,” said Makin.

“He started really quick and got me on the backfoot a little bit. I just had to get control of that backhand sidewall against him and if you don’t do that then, he is moving the ball from the middle and he’s got nice options on the ball.

“Pat [Rooney] is quality and he has had a good patch over the last six months. He’s getting in amongst it with the best players and fair play. He has a nice brand of squash, I’ll have to get into him and get him behind me to get some work into him and that’s the plan.

“You can’t give him time on the ball, he’s got a lot of options. Through the middle he’s particularly difficult, he’s got that big wingspan and he’s got a lot of hold, he’s creative. You’ve got to get it back in around him and force the volley and maybe he’ll start to force it.

“I’ve not had too many hours on court so far, which always helps. I’m trying to put some good squash together and I’m feeling good.” 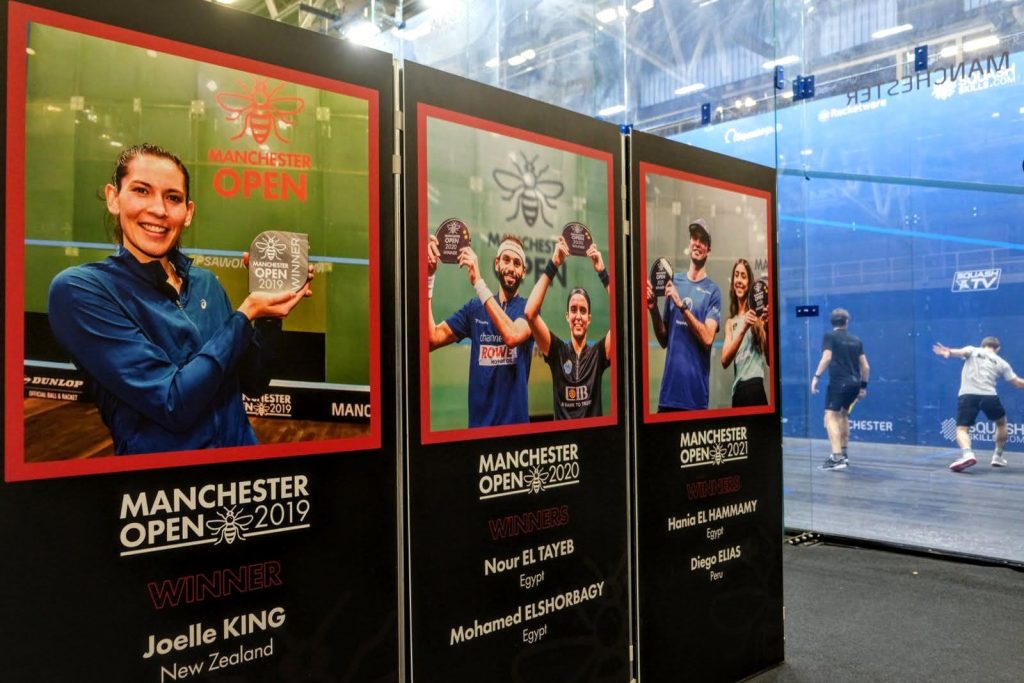