It’s semi-finals Day at the National Squash Centre, with four matches to decide the 2021 Finalists, starting at 17.30.

You can watch live on SQUASHTV and Facebook, follow the matches with live scoring and our social media feeds, and we’ll have reports and reaction from the Glass Court right here, with a roundup to follow at the end of the day. 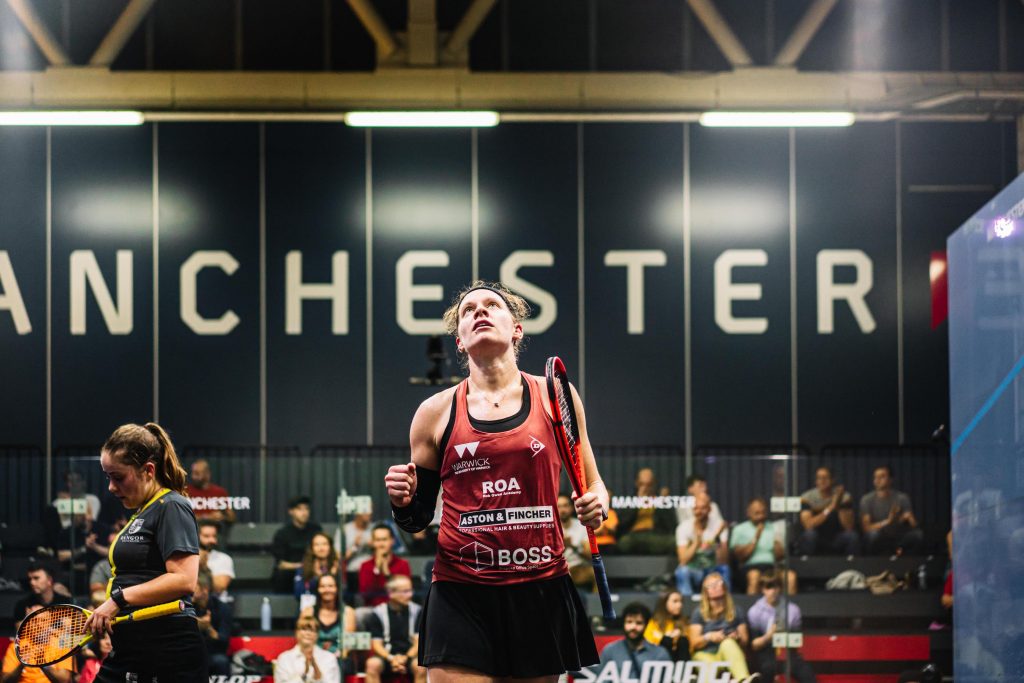 England No.1 Sarah-Jane Perry put in a battling performance in front of her home fans to book her place in the Manchester Open at the expense of close friend and 2019 runner-up Tesni Evans.

Perry boasted a 9-3 lead on their head-to-head record but did fall to Evans in the quarter-finals of the inaugural Manchester Open two years ago. History looked set to repeat itself after a strong start from Evans saw her battle to an 11-8 victory in the opening game.

It was all Perry in the second game though as she kept her composure despite some evident frustration with some of the refereeing decisions on show and some scrappy periods of play. In the third, she fought back from two game balls down after some unforced errors derailed the Welsh player’s chances of restoring her lead.

Unforced errors from Evans sent Perry into a commanding 8-4 lead in the fourth, but a courageous fightback from the World No.11 brought her level at 9-9. But Perry found the winners when she needed them as she finally shut the door on her opponent to secure her place in her first final since December’s CIB Black Ball PSA Squash Open.

🗣"Kudos to Tesni there, she just doesn’t go away, she’s an absolute fighter and probably the gutsiest competitor out there… I’m feeling quite relieved right now!”@SJPerry15 reacts after reaching the Manchester Open final!#MCROpen pic.twitter.com/06SDvQrUpR

“We were both playing nice squash yesterday and today – I’m sure Tez would agree with me – it was pretty scrappy,” said Perry.

“I was hitting the ball nicely yesterday, the day before and in practice this morning, but neither of us seemed to get our lines and keep it consistent. It was very scrappy and rather than playing good squash, I had to fight like my life depended on it.

“That won’t be one I want to watch back. Kudos to Tesni there, she just doesn’t go away, she’s an absolute fighter and probably the gutsiest competitor out there. I thought I’d just found my rhythm in the fourth game and – boom – it was 9-9. I had to play two really good shots there to close that out, and I’m feeling quite relieved right now.”

Perry will play either top seed Hania El Hammamy – in a repeat of that Black Ball Open final where she came back from two games down to win – or another Welsh player in Emily Whitlock in the final.

“They’re both playing really well and have very different styles, so that will be an interesting one,” Perry said.

“They’ve only played once, so it’s good to see different match-ups. That’s the beauty of squash, there are different physiques, different body types, different tactics and people use their physical and mental assets to their advantage.” 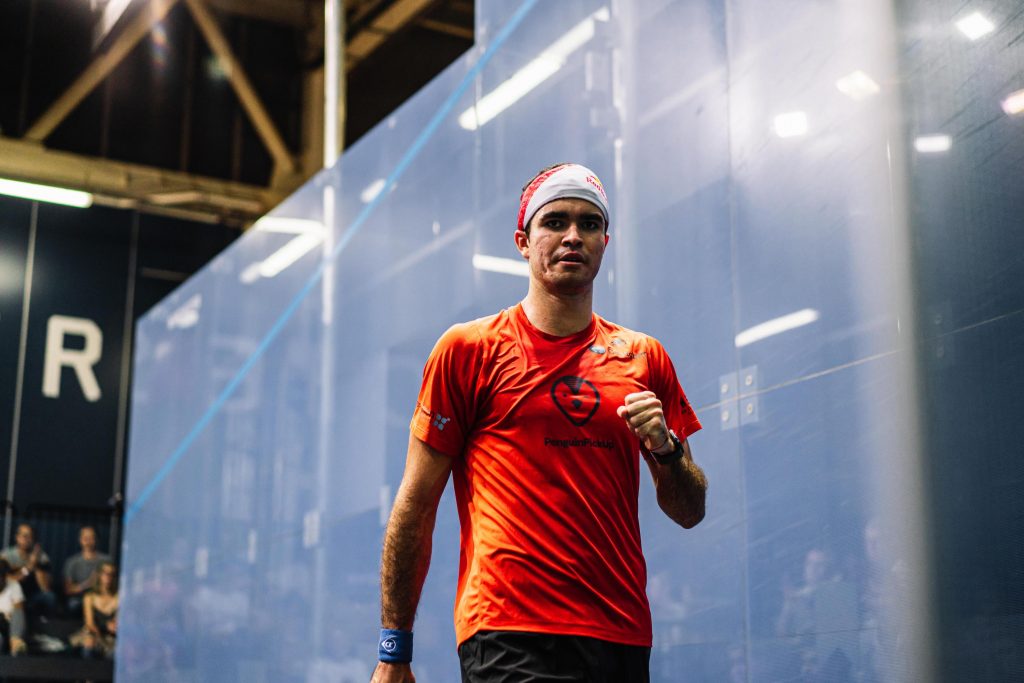 Peruvian Puma Diego Elias has ended an 18-month wait for a PSA final after he put in a sterling performance to nullify top seed Marwan ElShorbagy, extending his winning run over the World No.5 to six successive matches.

Elias has dominated ElShorbagy in their previous matches – winning seven of their eight matches on the PSA Tour – and it was more of the same today in Manchester as he controlled an increasingly exasperated ElShorbagy to complete an 11-4, 11-8, 11-5 triumph.

🤷‍♂️ "It's not often you totally send The Puma the wrong way!

It ends a run of four straight quarter-final exits for Elias and represents a significant step forward for the World No.8 who only made his return from a seven-month spell on the sidelines at last month’s PSA World Championships.

🗣"It feels good, a big win after so long! I feel like my game is coming back now."@diegoelias96 reacts after taking out No.1 seed Marwan ElShorbagy!#MCROpen pic.twitter.com/XuT6MzFQUf 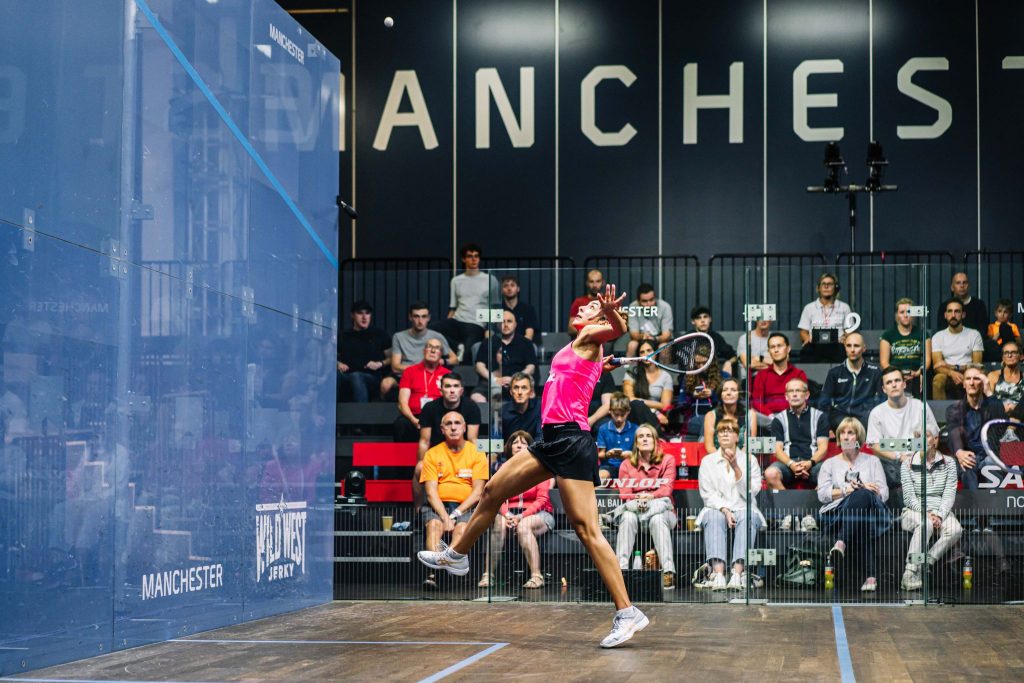 No.1 seed Hania El Hammamy continued her immaculate run to beat Wales’ Emily Whitlock 3-0 and progress to the final.

El Hammamy has been in ruthless form this tournament and going into the match was yet to drop a game, seeing off No.7 seed Tinne Gilis in 28 minutes in the quarter-finals and Rachel Arnold in 25 in round two.

Whitlock, too, had been imperious. The World No.23, who had played one match more than El Hammamy, had only dropped one game ahead of today’s encounter, a 13-11 loss to Nadine Shahin in round two.

Speaking ahead of today’s match, El Hammamy spoke of Whitlock’s strengths, describing their sole prior PSA meeting – a 3-0 win for the Egyptian in last May’s El Gouna International – as a “tough” encounter and praising the Welshwoman’s impressive recent form.

The Egyptian started with her trademark excellence, taking the first game 11-5 thanks in no small part to her quality of hitting into the back, frequently trapping Whitlock.

Whitlock, though, fought back hard in the second, rescuing game ball with a lung-busting rally to level at 10-10. Although the 27-year-old produced some of her best squash as the second game wore on, it was El Hammamy who emerged victorious, winning the game 14-12 with a delightful volleyed boast.

After such a tough defeat in the second, Whitlock understandably struggled in the third, with the 20-year-old El Hammamy punishing every mistake to seal the win 11-1.

🗣 "She beat me in front of my home crowd, so hopefully I can beat her in front of hers!"@HaniaaElHammamy lays down the gauntlet to @SJPerry15 👀#MCROpen pic.twitter.com/GmirCY7v8J

Speaking after the match, El Hammamy said: “I knew Emily was going to give her best squash today and I expected that and obviously she did. The second game was so crucial, I really had to push hard because 2-0 is definitely an advantage over 1-1. So I just wanted to keep the game, even when I couldn’t find my length and was a little outplayed I just told myself to keep pushing and find a way and I’m just glad I managed to win the second.

“I’m trying to relax as much as I can. I didn’t play my best in the World Championships and I wasn’t happy with myself and I learnt from that. I felt like I could come here, release the pressure and just play and enjoy my squash. That’s what I was thinking of in the second game, I felt like I was a little tense and I told myself I shouldn’t be making the same mistake again and I’m glad in the third I managed to play more freely and well.”

On her reasons for angling her chair away between games, she said: “I’m trying to focus in the game and try not to make anything take my focus away and that’s definitely a key to being able to perform well.”

On her opponent in the final tomorrow, Sarah-Jane Perry, she said: “She’s a very tricky player. I’m definitely looking for revenge after being 2-0 up in the Black Ball Open [last December] and then losing in five. She beat me in my home crowd so hopefully I can beat her in hers. Hopefully it’s going to be a good one against SJ.” 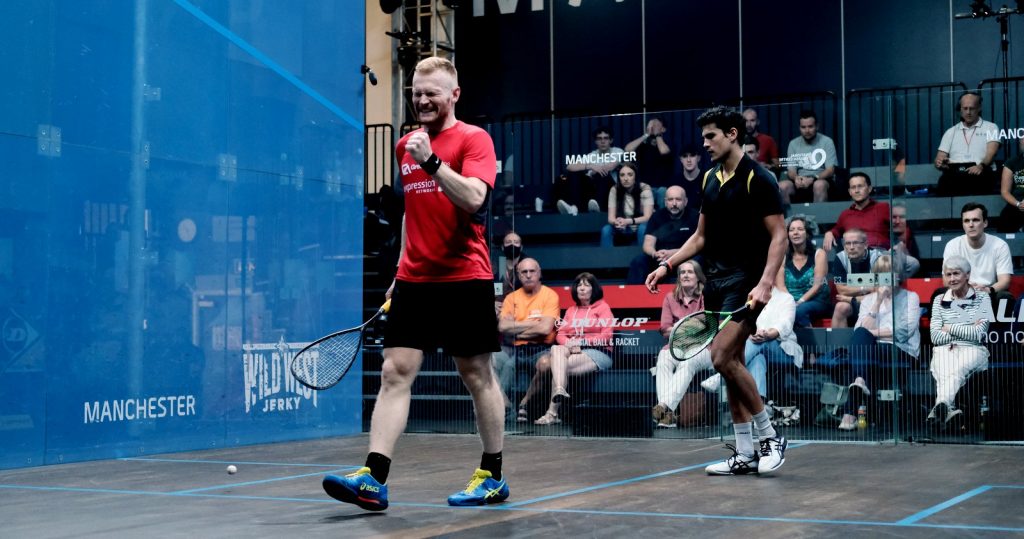 Welsh No.4 seed Joel Makin made his second Manchester final in a week, beating World No.22 Youssef Ibrahim 3-2 in a brutal, 81-minute thriller.

Makin went into today’s match with a lot of squash under his belt, after the World No.10 won the British Nationals last Friday.

Ibrahim, meanwhile, had already bolstered his growing reputation at this tournament, upsetting No.2 seed Karim Abdel Gawad in second round and No.6 seed Mohamed Abouelghar in yesterday’s quarter-final.

With two players of incredible stamina, it came as no shock that the match was a brutal affair from the start, with Makin taking the first game 11-6 after 17 minutes of hard-tempo squash.

The second was equally tough for both players, with Makin and Ibrahim dropping the pace of their hitting as rallies continued to go long. It was, Ibrahim, though, who managed to pull clear, taking the 19-minute slog 11-7.

The 22-year-old Egyptian carried the momentum from the second game into the third, taking it 11-3.

The Golden Tiger, however, returned strongly in the fourth, smashing his way to an 11-4 win.

With everything on the line, the fifth game returned to the pattern of the first two, with long, exhausting rallies and every point bitterly fought for.

At 7-7 in the fifth it was impossible to predict who would emerge the victor, though it was Ibrahim who was the first to make a move towards the final, taking a 10-8 lead and having two match balls. Makin, however, reacted incredibly, showing unbelievable grit and patience to turn the match on its head, finally finishing the game 12-10.

🗣 "He was hitting backhand cross court nicks… then four went down in a row at the end."@JoelMakin talks us through an EPIC win over @Yousseefibrahim as he reached the Manchester Open final! 🏆#MCROpen pic.twitter.com/OhyYPTLpTt

“That was tough. He was hitting stuff from everywhere I don’t know how many times I’m going to come here and say it. There was a patch in the fifth where there was not much I could do, he was diving across and hitting backhand cross-court nicks, backhand drops, they were all going in and then four went down in a row at the end. You keep trying to force him behind you and make some errors.

“[The referees] got two decisions wrong. Generally the decisions were fine, I just felt they got those wrong. I thought that would have given me a bit of a lead but he came back strong, put a few balls away and it was tight.

“I don’t feel like I’ve been playing that well. I though I was doing a bit better there, but again everyone seems to be flying around at the moment, so as long as I’m getting wins I’m happy with it.”

On tomorrow’s final opponent, Diego Elias, he said: “He’s got through well. I’d like to think I’ll come back from [the heavy schedule]. The last two days have been tough for sure, but I want to make sure I get a bit of biking and physio done and hydrate to go again.

”My cousin Lewis and Jen came across today, it was great… we need [a crowd]. You want to play in front of a crowd, it’s exciting isn’t it, people getting behind it and I hope it keeps growing for the British Open. Sport needs those kind of things. You need a crowd cheering you on.”